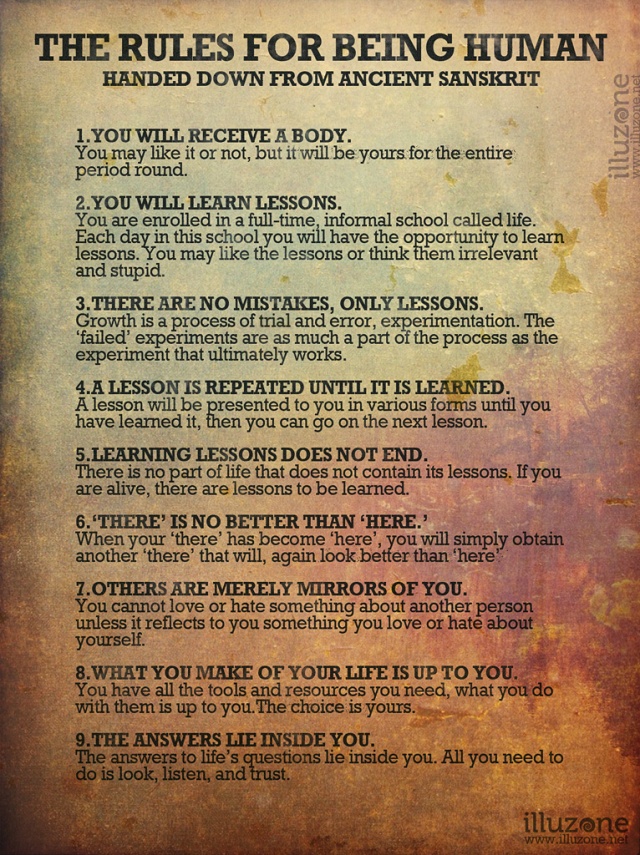 Most pithy and insightful quotes or insights that come across the interwebs deal with single issues or finite concepts. However this is the most comprehensive and broadly truthful thing I have come across in a very long while. Many of you already know some, most or all of this, either intuitively or from study. I cannot verify that this is all from the Sanskrit but I can tell you I originally discovered many of these truths from studying Hindu mythology and sacred texts. I must confess I struggle to uphold a life based on these rules. I think most of us do. Here is bit of personal commentary on each rule. Well, a lot of commentary.

Rule 1. Having a body, or form, is what separates us from every other sentient entity, i.e. God, angels, spirits, etc. This is why it was so important that Jesus take on human form. The physical plane is the densest part of the universe. This is why so many scientists have been pursuing the Higgs Boson, to understand matter. Having a form locks the soul and spirit into one conceptual vessel in time and space. It is rumored that angels are jealous of humans for having a body. Only because we have a body can we appreciate the physical universe. Some say growth can only happen on all planes at the same time, which means that we can only evolve our spirit while we inhabit a body.

Rule 2. The purpose of life is to continue to evolve into a more perfect being, with the ultimate goal to become godlike. While that goal may be unattainable there cannot be a lesser goal for humankind if we are to become the best we can be. This is why life is a constant learning process. Each time we learn we evolve. The lessons are always worth learning. We just have to remember that even the seemingly insignificant lessons are meaningful. A lifetime devoted to constant learning keeps the mind and soul youthful and flexible.

Rule 3. Yoga is the purposeful aspect of any activity. We can be taught the yoga of anything only because somebody experimented and failed and kept trying until the secret of the yoga was revealed. Unless we have the courage to exceed our imaginations by trying new things and failing we can never expect to grow at all. Remember God doesn’t have accidents. As we live we rise and fall like a wave of light. The peaks and valleys show us both the divine and the profane. We learn. We grow. We are like light as we are both a particle and a wave.

Rule 4. This can only be experienced. It is a function of karma, or destiny. God has a plan for all of us and if we come to a part of that plan that we have trouble learning we are presented with a variation of the lesson until we learn it. This may possibly explain why predestination can coexist with free will. We always have the free will to reject our destiny, but will be given an infinite number of opportunities to accept it.

Rule 5. For those who believe in reincarnation this extends through many lives. It is said that we come back into a life best suited to fulfill our karma. It is also why we only age physically. We continue to grow mentally and emotionally. We age because of that density of the physical plane, which has something to do with friction, entropy and gravity. Gravity is the last force needed to be explained in order to have a unified field theory, which is the ultimate goal of sub atomic physics. Our minds and hearts are not subject to gravity and will continue to learn without deteriorating.

Rule 6. Everything is relative and absolute at the same time. That is to say every object, concept, idea or activity has a both a relative and absolute aspect. Einstein realized this and saw that it could be observed at or near the speed of light. Absolutely, we are always here. But relatively, there is always a somewhere else that we can see from here. When we realize that the somewhere else is also here, once we get there, then we begin to understand relativity. There is always an external perspective, an alternative point of view to every existing thing. This is why there are an infinite number of points on a line. Time is the dimension that moves us through the relative, always staying in the absolute moment. This is a most pure contradiction. Maintaining our bodies, keeping the mental, emotional, ethereal and spiritual all together in one physical form, is the most sublime contradiction known and it is in this apparent contradiction of the absolute and relative, in time, where we liberate the incomprehensible energy necessary to maintain those bodies. Once again, Einstein was the first to understand this, expressing it as E=MC squared.

Rule 7. There are nearly infinite numbers of cosmoses. Each contained by or containing another. There are billions of universes comprised of billions of galaxies comprised of billions of stars and more billions of planets and moons which have billions of objects and life forms which have billions of molecules and billions of atoms down to the many and various sub atomic particles. There is a pervasive concept in religion and mythology that says any one distinct part of a cosmos, regardless how large or small, is an integral part of a larger cosmos and also contains smaller cosmoses. These cosmoses mirror each other in function. For example the christian world view says we are all, the billions of us, part of the body of Christ yet science tells us that we are also a body, of which billions of cells are a part. Therefore we are all both a part and a whole at the same time. So cosmologically we are all the same. So seeing something in someone else must be related to seeing it in us. We mirror each other so we recognize ourselves in others. From a spiritual perspective we recognize the divine in each other, which leads to the conclusion, as stated by Christianity among others, that we are all children of God.

Rule 8. This is about dharma and karma. Dharma is our spiritual duty. It is what we feel bound to and what aspires us to divinity while inspiring us to greatness. The catch is we have free will and can choose to deny our karma, or destiny, and our dharma, or duty. Because of God’s plan for us we have all the requisite abilities, characteristics, genetic information needed to attain that destiny according to the plan. These are God given and always accessible to us. We choose through free will just how well we make use of these gifts.

Rule 9. This goes back to relativity and cosmoses inside cosmoses, karma and dharma and an infinite, all knowing, onmipresent God. One reason some call the higgs boson the god particle is that they see it as the inner boundary of universes, the particle from which all other particles are made. The one point of the big bang. By finding the inner boundary of existence some hope to understand God, the outer boundary of existence. The mystery of us having and maintaining a body is that it is a model for how all universes operate. It has billions of individual parts that working together make one distinct entity. The human body is a universe unto itself. Therefore we can know everything worth knowing by looking inside ourselves, experimenting and learning lessons understanding how we are all one and infinite at the same time and that our lives rest entirely in our hands.

By now you have seen that my observations about this allegedly spiritual knowledge is chock full of physics. Since the purpose of both physics and spiritual discovery is to explain existence, it makes sense that they would both be talking about the same thing. Well enough of my ramblings. This list of rules just touched off a stream of consciousness in me and I felt compelled to communicate it. Thanks, as always, for humoring me. I do think that these rules are valuable and I hope they can inspire you to become that ever more perfect being you so strongly hope to be.

UPDATE: As you may have read in the comments these rules are a major focus of Dr. Cherie Carter-Scott’s work, which is not attributed on the widely circulated cyber meme poster. For shame. Thank you Dr. Carter-Scott for your clarity. Also it is my understanding that there may be a tenth rule that states that “You will forget all of this at birth.” In many ways life is a zero-sum game and as we learn we also forget. But there are signposts that catch the eye of those who are looking for them which lead us to triggers that help us remember our true natures. We should offer thanks to those who dug into their subconscious to find them.

From the Lost Land of Truth

Talking, we share feelings. Feelings live in the brain but are tempered by the heart. The form is the vessel that informs the heart. The three together house the consciousness. Consciousness welcomes the soul. Knowledge of soul follows when one takes a leap, not of faith but of love.

Other Stuff What I Wrote